Why dividends will continue to underpin retirement income in 2023

Why dividends will continue to underpin retirement income in 2023

The retirement income conundrum never ceases to get easier, and you can understand why many investors may have found it all the more confusing in recent times.

When RBA Governor Philip Lowe declared in 2021 there would be no rate rises until 2024, it was a hard pill to swallow for those retirees whose cash investments had been going backwards for many years.

We now know that was a serious misstep from Lowe. Just a few days ago he offered an apology of sorts during a Senate estimates hearing.

“I’m sorry that people listened to what we’d said and acted on that, and now find themselves in a position they don’t want to be in. At the time, we thought it was the right thing to do,” said Lowe.

2022 has seen a series of rate rises, the first in the country for 11 years. If the official cash rate goes to 3.6% as some economists have predicted, this will be the most aggressive period of RBA tightening ever!

At first glance many retirement income investors have heralded this as a win, with term deposits and other so-called safe asset classes expected to generate stronger yields.

But they’re overlooking the elephant in the room – inflation. 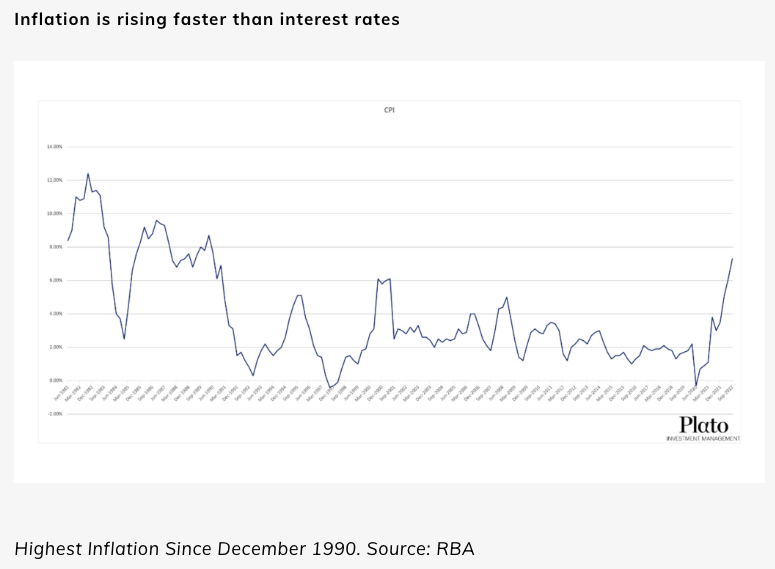 The chart above demonstrates the 30+ year highs in inflation that we’ve experienced here in Australia since the onset of the COVID pandemic (discounting the GST effect period in 2000). In the September 2022 quarter, the CPI rose 7.3%.

This is significant for income investors, particularly retirees who generally see no wage growth to counter inflation because they simply rely on income from their investments to make ends meet.

Below I highlight the real earnings of $1 million dollars invested in term deposits and bonds.

Despite much being said about the impact of rate rises on cash-backed asset classes, investors who rely on them continue to lose money in real terms. Some things change, some remain the same

So, while a lot has changed over the past 12 months, much does remain the same.

Rising interest rates and inflation is a return to a dynamic that has always existed throughout the history of financial markets – an economic cycle.

This is illustrated below, where we chart the income generated from gross dividends on $100,000 invested in 1980 (light blue line). 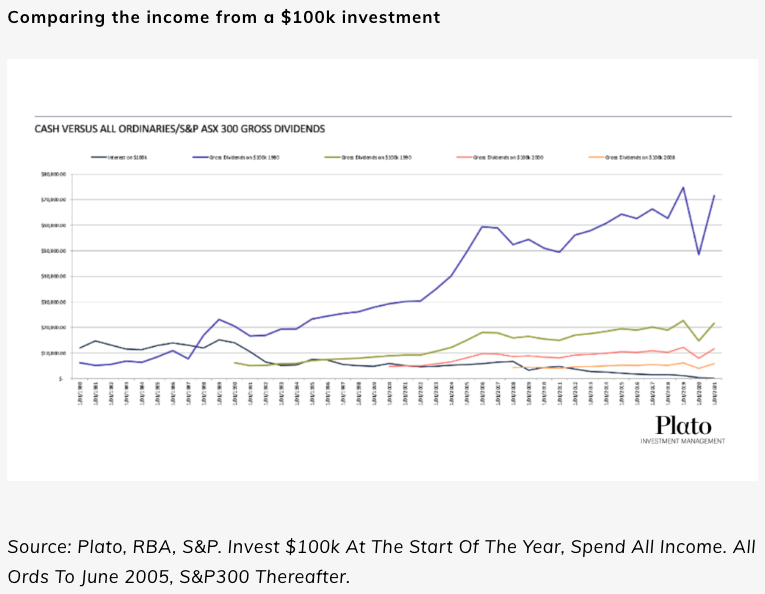 Franking credits are another retirement income sweetener that also hasn’t changed. For zero-tax investors a fully franked dividend is the most valuable form of income.

In the chart below you can see that for every one dollar of income received from fully franked dividends by pension-phase and other tax-exempt investors, an additional 43 cents on top in franking is received.

Favouring companies that pay fully franked dividends, where possible, in 2023 is a no-brainer.

And finally, the ability for active and nimble portfolio management to deliver greater income hasn’t changed.

At Plato we don’t ascribe to the traditional set-and-forget dividend investing strategy. We believe investors must move to where the dividends are flowing.

The energy and financials sectors are good examples of this. We’ve generated strong income over the past year from these sectors and remain positive on them for the year ahead. But for many years prior, they were poor performers for income investors.

We think a number of companies in the resources and financials sectors are likely to continue to be strong and sustainable dividend payers into 2023.

However, it’s imperative investors avoid dividend traps – and there’ll be many to emerge in 2023. At Plato we believe avoiding dividend traps is just as important as identifying the strong and sustainable dividend payers. For some more insight, I spoke about some stocks we’ve identified as dividend traps in a recent Buy Hold Sell episode.

Plato’s modelling is projecting that at an index level in 2023 the ASX200 will deliver a cash yield of 4.4%, and 6.0% when including franking credits. On top of this, as high yield income fund managers, we think significant additional income can be generated through the benefits of active stock selection and tax-effective portfolio management.

So, we do think actively-managed Australian equities will continue to play a major role in helping to solve the retirement income conundrum in 2023. Particularly as term deposits, bonds and other so-called safe cash assets keep delivering negative real returns.